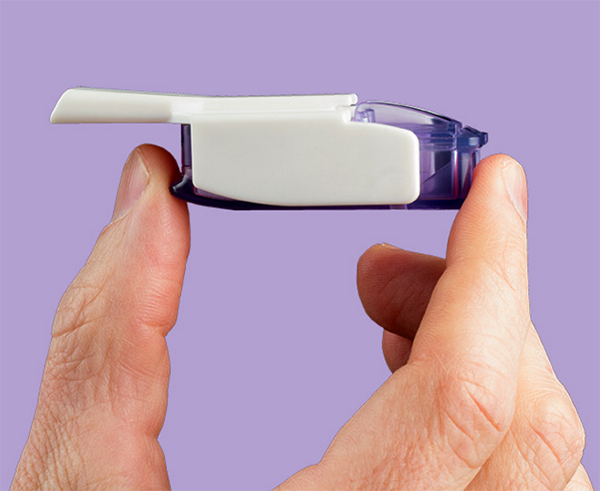 When you think of insulin, you probably think of an injectable medication that you give yourself either with a syringe, insulin pen, or insulin pump. However, an alternative exists. Powdered insulin, also known as inhaled insulin, is a less-common product that nonetheless has a role in diabetes management.

What is Powdered Insulin?

The active ingredient in Afrezza is short-acting human insulin. It additionally contains fumaryl diketopiperazine and polysorbate 80, which are the excipients, or the medium through which the drug is mixed and therefore able to be administered.

At this time, no generic equivalent for Afrezza is available. For this reason, powdered insulin can be expensive: 180 cartridges can cost almost $1500. However, a manufacturer prescription savings program is available that can reduce your copay to $15 if you have commercial insurance coverage.

Is Powdered Insulin Safe and Effective?

Powdered insulin is safe and effective and was approved by the FDA in 2014. In comparison to injectable rapid-acting insulins, powdered insulin:

Like any drug, powdered insulin has some side effects. These include:

How Long Does Powdered Insulin Work?

Powdered insulin is short-acting human insulin, and is, therefore, generally restricted to mealtime use. It does not replace long-acting insulin. The exact onset and wearing-off times of powdered insulin depend on the dose you are taking:

Can I Use Powdered Insulin if I Have a Lung Condition?

Even if you have only mild lung issues, it is important to be cautious with powdered insulin if you take it with other inhaled drugs. For example, studies have shown that taking albuterol while you are on powdered insulin can significantly increase the amount of insulin in your body.

Can I Use Powdered Insulin if I Am Pregnant or Breastfeeding?

That said, there is no clear link between powdered insulin and any pregnancy harm, including birth defects and miscarriage. Doctors believe that the ingredients in powdered insulin likely get into a mother’s breastmilk. However, the risks linked to inhaling powdered insulin, like lung function problems, are unlikely to be present if the baby is exposed via another route like breastmilk.

How Do You Use Powdered Insulin?

Afrezza comes as an inhaler with single-use cartridges in 3 different strengths:

Because powdered insulin is only available in preset quantities of 4, 8, and 12 units, a person’s dosing must reflect the available cartridges. A person who needs more than 12 units of insulin will need to use multiple cartridges to achieve the necessary dose. For example, a person who needs 20 units of insulin would need to use both an 8-unit green cartridge and a 12-unit yellow cartridge to add up to 20 units.

Powdered insulin’s dosing may be slightly different from that of injectable insulins: for this reason, dosage adjustments may be needed if you are switching to powdered insulin from another insulin product. If you have never before been on insulin, the usual starting dose of powdered insulin is 4 units inhaled at the start of a meal.

Afrezza is a dry-powder inhaler, meaning that it does not spray out of the device like, for example, some asthma inhalers. Instead, the inhaler is breath-powered, meaning the person must inhale deeply from the inhaler’s mouthpiece in order to breathe in the drug.

It is important to remember that powdered insulin is a prescription-only product. Searching for it on sites like Amazon will bring you to a similarly-named over-the-counter product called inulin, which is a different substance altogether.

Inulin is a prebiotic intended for oral use only. A prebiotic is a supplement that provides nourishment for beneficial bacteria in your gastrointestinal tract. As a supplement, it has not been evaluated or approved by the FDA for the treatment of any medical condition. As such, inulin is not a replacement for insulin. That said, some small studies have shown that inulin may help to control blood sugars in people with diabetes. Further studies are still pending, but for now, inulin does not have a routine place in diabetes management.